But oh how the mighty can fall. When the crash came the sales suddenly stopped and the new cars, one after another started coming back to roost, as each farmer realized he could no longer make the payments. Dad said many times "The real mistake we made in 1928 was hiring salesmen. We should have hired collectors."

The town of Chinook in 1928 boasted 5 lumber yards, 4 banks, 3 grocery stores, 2 hardware stores, a dance hall, Chinese laundry, 3 livery stables, tennis court, skating rink, curling rink, 4 churches, and Cooley Brothers Garage. The population was said to be approaching 2000. But by 1932 one fire after another had left gaping holes of concrete basements on both sides of Main Street.

Everyone knew what was causing these fires. That is, everyone but the insurance company. Dad told many stories of how each businessman agonized over the latest fire that left yet another concrete foundation and basement hole on main Main Street. But what good would it do to put your fellow businessman in jail? After all he couldn't make a go of it and for the past year the poor fellow was crazy with fear and shame because he had to sign up for relief, and accept hand outs from the box car of fish sent from the Maritimes and parked on the siding.

The businessman was a young entrepreneur, raising a family, with every cent invested, and a big loan from the bank (and three payments behind). The fire insurance would pay off all his debt and with enough left over to make a new start somewhere far away from this Godforsaken country, where it never rained and the wind blew nothing but dust.

Dad explained that no man in the community had the heart or the right to suggest foul play, but he also told of the grocer who after his store burned to the ground, was selling canned goods from his house at bargain prices. It seems he had a premonition of a fire and had transferred most of his non-perishable stock to the basement of his house.

Much has been said about the effects of the depression on the whole of North America, and I as a depression baby witnessed some of the devastation. A young boy however knows no other world and my memories of these years were happy and exciting ones. 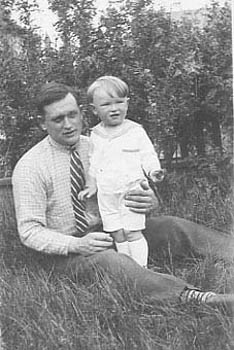 Ray with his father Leonard Jewitt Cooley in 1930

The first two young years of my life were a time of spoilage never seen since in the Cooley family. I know this from our picture album, which contained a profusion of pictures from 1927 to 1930. These pictures calendared the birth of brother Keith and brother Lorne, but stopped abruptly in 1931.

In 1931 my folks had to admit that they were not rich. They had to agree that they could no longer dine out in what was once the lavish surroundings of the best restaurant in the town of Chinook (Tom and Charlies, featuring Chinese or American cuisine).

My picture album contained a very few accounts of events my folks felt vital to the telling of the catastrophic events in their lives. The snow as it lay piled eight feet high, blocking our way out of the house. The great dust storms that stopped all activity except quaffing a pint of beer, if you could scare up a dime to pay for it. (Dad didn't drink, but John was a steady customer). The great shafts of sand streaking across the floor of our house. Finding it's way from under each window and door (this had been the the very valuable top soil that each farmer could not do without). These were the only pictures that now adorned my album. I did not know it, but this was the Great Depression.